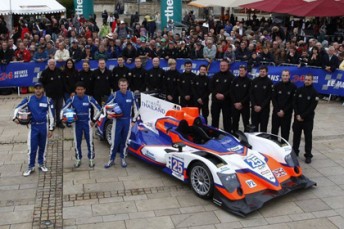 Jan Charouz, Tor Graves and Australian John Martin will line up 14th over all in the 24 Hour of Le Mans

As Le Mans prepares for the showcase drivers parade of champions through the centre of the city, the Australasian contingent have qualified in prominent positions for the prestigious 24 Hour race this weekend.

But the biggest surprise came from Queenslander John Martin who managed to put the Alan Docking Racing ORECA Nissan on pole in the massively competitive LMP2 class by snaring the 14th fastest time outright.

Martin had been looking forward to his debut at the La Sarthe circuit after a promising podium run in the 6 hours of Spa last month, but never in his wildest dreams did he expect to be snapping at the rear wings of the LMP1s.

There was no holding back Martin’s emotion on his Facebook page: “Pole at Le Mans baby. Giddy up.”

Five places further back on the grid sits New Zealander Brendon Hartley who is driving with the Murphy ORECA Nissan LMP2 squad.

Hartley, a one-time Red Bull F1 test driver, had a new helmet designed for Le Mans and is still coming back down to earth following the traditional night qualifying session.

The New Zealand racer was being groomed for a spot in Red Bull’s second grand prix team, Toro Rosso, but with his F1 dream on hold he is thrilled at his chance to shine on the biggest sports car stage of them all.

For Australian viewers, the Le Mans 24 Hour will be streaming live on Network Ten’s website tensport.com.au. The streaming starts 10.30pm on Saturday, June 16.