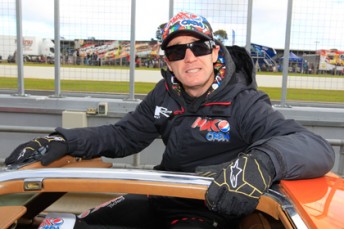 Injured Bathurst 1000 legend Greg Murphy is unsure what his driving future holds as he recovers from his second back operation.

Murphy has been forced out of his #51 Pepsi Max Crew Commodore VE due to an operation to fuse a vertebrae on Tuesday.

His rest and recovery will keep him out of any racing competition until September at the earliest. Kelly Racing’s Development Series and endurance driver David Russell is filling in for Murphy at Hidden Valley Raceway this weekend.

Murphy is currently racing on a one-year deal with Kelly Racing, who will become Nissan’s factory team in 2013. Murphy’s long-standing relationship with Holden is likely to be a factor in his future with the team, and Murphy is unsure where he’ll be driving next year.

The four-time Bathurst 1000 winner admits that laying in a hospital bed is not the best way to improve his position.

“As far as next year goes, I have no idea,” he told Speedcafe.com.

“I just need to play it out and see what presents itself. I’m hoping this operation doesn’t do too much damage to my future. I don’t know if it will or won’t, and that’s not really up to me.

“I will be judged on the opportunities that are out there …”

In his first interview since his operation on Tuesday, Murphy spoke to Speedcafe.com exclusively about his recovery, his future and some of his frustrations surrounding his injury.