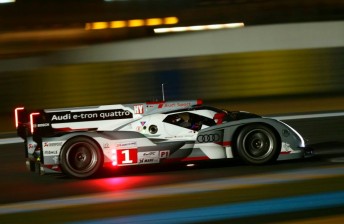 A late effort from Andre Lotterer has seen the #1 Audi e-tron lead an Audi 1-2-3 in the first qualifying session for the 2012 Le Mans 24 Hours.

Lotterer cut through the night in a best time of 3:25.45s to end the first of two qualifying sessions 1.1s quicker than Tom Kirstensen in the #2 e-tron.

The Dane had joined his team-mate in making a late run for the top spot by fell short after finding traffic.

The #8 Toyota (Davidson/Buemi/Sarrazin) was sixth despite completing just five laps in the earlier practice session before requiring an engine change.

The #21 Strakka HPD (Leventis/Watts/Kane) was the fastest of the non-factory LMP1 entries, while the #46 TDS Oreca-Nissan (Beche/Thiriet/Tinseau), #97 Aston Martin (Fernandez/Mucke/Turner) and #79 Flying Lizard Porsche (Neiman/Pilet/Pumpelly) led the way in LMP2, GTE Pro and GTE Am respectively.

The Nissan DeltaWing lapped 26th fastest despite losing tack time when a jolt from the circuit’s kerbing tripped the car’s masterswitch and onboard fire extinguisher.

A second qualifying session tomorrow will combine with the opening night of running to set the grid for the weekend’s race.