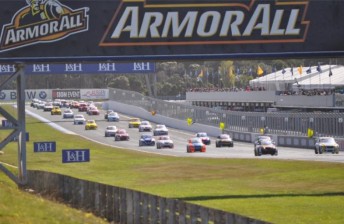 The FW1 Aussie Racing Cars series has added a round to its 2012 calendar in order to support the V8 Supercars’ return to Sydney Motorsport Park in August.

The pint-sized class is the first support category to be confirmed for the event, which was a late inclusion on the V8 Supercars schedule in the wake of a failed attempt to secure an additional international round.

According to Aussie Racing Cars commercial director Jason Bargwanna, a presence in the Sydney market is a great boost for the category.

“When V8 Supercars added Sydney Motorsport Park to their calendar we jumped at the opportunity to support the event,” said Bargwanna.

“ARC has had a Sydney round included in the series every year since inception and we see the Sydney market both from a competitor perspective and from a fan perspective as very important to our series.”

A further two support categories are expected to be sourced for the event, which will see the V8 Supercars undertake their practice, qualifying and races on Saturday and Sunday only.

The three support categories however will each take to the track for a pair of practice sessions on the Friday.