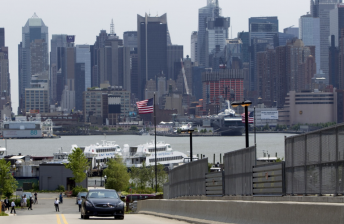 Vettel drives the Infiniti around the New Jersey layout

Sebastian Vettel has become the first Formula 1 driver to complete a lap around the new-for-2013 New Jersey F1 street course.

The 24-year-old German drove around the 3.2 mile circuit at Port Imperial in an Infiniti IPL G Coupe – the luxury and performance car sponsor of his Red Bull Racing team.

The New Jersey race, penciled in for June next year, will be the first of two Grands Prix in the USA next year, adding to the new Austin, Texas circuit that will makes its debut on the F1 calendar in November this year.

While the New Jersey layout will be new, Formula 1 has a history in the Rochester area. Watkins Glen, located just 80 miles south of New York, was the former American home of the US GP and has hosted the most GPs in the USA.

Vettel says that the new circuit will have plenty to offer drivers and spectators.

“The circuit is great. One section is a bit like Montreal with a long fast straight but it’s also quite up and down, which is a bit like Spa,” the dual world champion said.

“New York is such a great city with a great energy. It’s will be great to have a Formula One race here – I think there will be some good bars to go to after the race!“