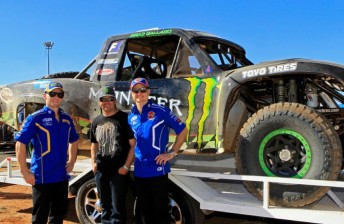 V8 Supercars drivers Tim Slade and Lee Holdsworth have gained a new appreciation for off-road racing by visiting the end of this weekend’s Finke Desert Race in Alice Springs.

The Stone Brothers Racing team-mates met the event winners and observed their respective machinery having stopped in Alice Springs during their three-day media tour from Adelaide to Darwin on The Ghan passenger train.

First run in 1976, the Finke sees competitors complete the 460km journey from Alice Springs to Finke and back again over two days.

CLICK HERE for Speedcafe.com’s earlier report on the rally

Holdsworth said he was amazed by the punishment that the competing vehicles withstand across the desert terrain.

“It’s great to be here at the finish, meet the winners and look at the race winning bikes and trucks,” Holdsworth told Speedcafe.com.

“That Monster truck looks like an awesome thing to drive. It’s a very serious bit of machinery and it really has to be in order to conquer the sort of conditions they face out here.

“We’ve seen a lot of rugged terrain so far coming up in The Ghan, and clearly that sort of landscape takes its toll on cars and bikes. 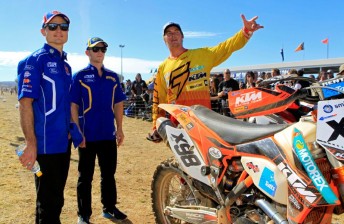 “I haven’t been up close and personal with any of this sort of racing before, so to come and see the end of this rally has been another great experience on this trip.”

Having met Holdsworth and Slade after the chequered flag, Gallard enthused over the possibility of seeing the V8 Supercars stars tackle the event in future.

“I’d love to see these two guys come out and have a run in an event like the Finke,” Gallard told Speedcafe.com.

“Lowndesy (Craig Lowndes) has a go at the Australian Safari each year and really loves it, and Todd and Rick Kelly have always shown an interest in off-road as well.

“Obviously it’s a fairly specialised skill, so it’d be a challenging transition for them. These Trophy Trucks aren’t easy to drive, but the fans love them because they’re flamboyant and hard to control.”

Despite competing on dirt in both Sprintcars and the Australian Rally Championship’s Side-by-Side class in recent years, Slade expressed caution when asked of the possibility of competing in desert rallying during his V8 Supercars career.

“I think an event like the Finke is probably more on the risky side than anything I’ve done in terms of speedway or rally,” Slade told Speedcafe.com.

“It’s super fast and seems to rely on how confident you are with the terrain and vehicle. I’m sure it’d be great fun to drive one of these trucks, but it doesn’t look like the sort of event that’d be kind to rookies.”

Slade and Holdsworth are scheduled to arrive in Darwin tomorrow evening ahead of this weekend’s Skycity Triple Crown at Hidden Valley Raceway.