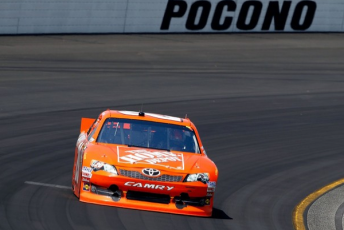 After reclaiming the lead from veteran Mark Martin on Lap 157 of 160, Logano pulled away to win, his first victory since a rain-shortened win at New Hampshire in 2009.

It is the first time in 31 races that a pole-sitter has gone on to win.

More important, the second triumph of Logano’s career couldn’t have come at a better time – during a contract year in which doubters have considered the 22-year-old a prime candidate to lose his ride at Joe Gibbs Racing to a more established star.

“I hope it shuts ’em all up,” was Logano’s terse wish for his critics after he climbed from his winning #20 Toyota.

Matt Kenseth finished seventh and took over the series lead by 10 points over Dale Earnhardt Jr, who came home eighth after leading 36 laps.