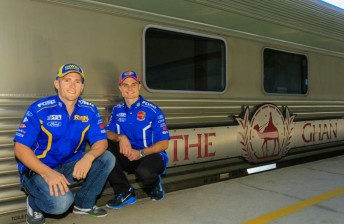 Holdsworth (left) and Slade with The Ghan

V8 Supercar drivers Lee Holdsworth and Tim Slade have  begun a three-day train journey from Adelaide to Darwin ahead of next weekend’s Skycity Triple Crown at Hidden Valley.

The duo are travelling on the world famous passenger train The Ghan as a media tour for sponsors IRWIN Tools and Lucky 7.

Having arrived in Adelaide from their Gold Coast homes by plane, the two drivers will complete the full 2,979km voyage across the next three days.

The train will make its regular stops at Alice Springs and Katherine along the way, with the former providing the drivers with a chance to take in the finish of the annual Finke Desert Race.

Not surprisingly, both drivers said that the trip will be a unique experience.

“It’s obviously a very different way for us to travel to an event,” Holdsworth told Speedcafe.com.

“The trip through the centre of Australia should be pretty spectacular, and it’ll be great to have a look around Alice Springs and Katherine. 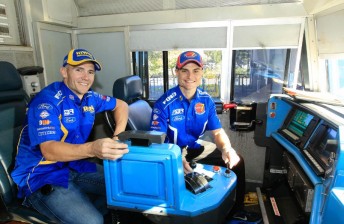 The duo drivers survey the controls

“It really is a once-in-a-lifetime experience I’m looking forward to making the most of it.”

The drivers were given a brief tour of the one kilometre long train this morning before it departed, with Slade impressed by the enormity of the machine.

“We got to have a bit of a look around in the locomotive which was great,” Slade told Speedcafe.com.

“I’m told that the two locomotives produce around 2,800bhp, so it’s certainly an impressive unit.”

Speedcafe.com is also travelling to Hidden Valley on The Ghan. Stick with Speedcafe.com for further updates from the trip.

See below for Speedcafe.com’s video