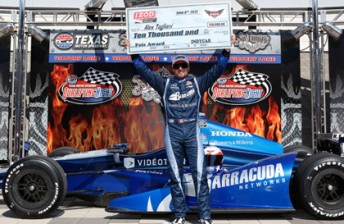 The Canadian set an average speed of 215.691mph across his two qualifying laps at the wheel of the Bryan Herta Autosport entry, scoring the eighth pole of his career and the first for Herta’s team.

Indy 500 winner Dario Franchitti will start from second in his Ganassi entry having missed pole by an average difference of 0.0102 seconds.

Tagliani said that his team’s fortunes have swung dramatically since switching to Honda power.

“I told people after we sat out the race in Brazil that our season started in Indy and it did, with Honda power,” said Tagliani.

“It is an honour to be part of the Honda family and I am so happy to win this pole for the team and for Honda. We are very happy to start up front and I’d like to think that we will be a threat in the race.”

Graham Rahal will start from the inside of the second row ahead of New Zealader Scott Dixon.

Penske’s Will Power will start fifth and the first of the Chevrolet runners. His Australian team-mate Ryan Briscoe will start 12th.