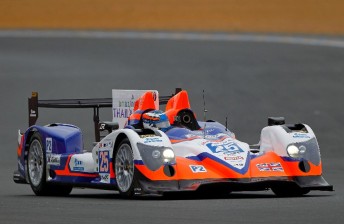 John Martin aboard the ADR-Delta entry, which was seventh fastest of the LMP2 runners during Sunday's test

Australian driver John Martin is confident of recording a strong result on debut in the Le Mans 24 Hours later this month.

Martin is competing in the race as part of his regular World Endurance Championship duties with Alan Docking Racing’s Nissan-powered Oreca LMP2 squad.

Together with co-drivers Robbie Kerr and Tor Graves, Martin led the LMP2 class for much of last month’s 6 Hours of Spa before a strategy error saw the trio take the flag in second place.

The former Australian Formula Ford Champion will be one of two Australians at Le Mans this year, as 2009 winner David Brabham returns to the event with JRM’s HPD project.

“I’m really looking forward to racing at Le Mans. It hasn’t really sunk in that I will be racing at one of the world’s largest motorsport events,” said Martin.

“I feel very privileged to be one of very few Australians that get the opportunity to race at the Le Mans 24 Hour.

“With our Nissan-powered Oreca I believe our ADR-Delta team have a really good chance of achieving a great result in what is a very competitive LMP2 category.

“Hopefully my week goes to plan and our team can give Nissan a victory at Le Mans. It would be a dream come true to stand on that famous podium on Sunday afternoon.”

Exactly one quarter of this year’s Le Mans field will be powered by Nissan engines, with 13 of the 20 LMP2 entries utilising the company’s 4.5 litre V8.

Nissan has also backed the Highcroft Racing-run DeltaWing effort, which is competing as the race’s ‘Garage 56’ entry for ‘Cars Displaying new Technologies’.

The radically styled DeltaWing features a 1.6 litre Nissan engine, and is expected to lap amongst the slower LMP2 runners during the 24 Hour race.