Another podium for Cameron Donald at TT

Another podium for Cameron Donald at TT 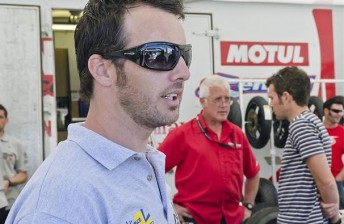 Australia’s Cameron Donald has collected his third podium at the Isle of Man TT, finishing runner-up in the second Supersport race of the week.

After finishing second by less than a second to New Zealand’s Bruce Anstey in the first Supersport race on Monday,  it was Northern Ireland’s Michael Dunlop who beat home the Aussie in today’s second event.

Although the Victorian is yet to win a race at this year’s TT, he remains in the fight for the overall title with just eight points now separating John McGuinness (74), Anstey (67) and Donald (66).

It was Dunlop’s third Isle of Man TT victory, following a storming performance around the Mountain Course; which was held at 6.20pm in the evening after morning rain delayed the schedule.

The four-lap race of the 60.73km Mountain course was an early battle between Donald and both Michael and older brother William Dunlop.

Early leader William Dunlop retired near the end of the opening lap, leaving Michael with a 5.5-second advantage. This was extended to 10 seconds at the end of the second lap before the Australian hit back to reduce the gap to four seconds heading into the final tour of the famed course.

Stung into action, Dunlop attacked the final lap to win the race by a 13.2 seconds.

Far tighter in the end for third with Ryan Farquhar beating Anstey by 0.01 of-a-second.

The final big race of the week is the Senior TT which will be held on Friday.