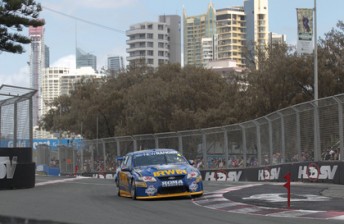 The famous back straight chicane at the Surfers Paradise street circuit

Surfers Paradise’s famous back straight chicane has undergone a track resurface – five months before this year’s Armor All Gold Coast 600.

The Turns 6-10 chicane has received a new layer of bitumen after V8 Supercars and the Gold Coast City Council detected significant surface degrading.

Two other smaller sections of the back straight have also been resurfaced.

The Gold Coast City Council says that the fresh track surface has been given the tick of approval from V8 Supercars.

“Over time, some surface areas that make up the track had become degraded due to wear and tear,” a council spokesperson told Speedcafe.com. 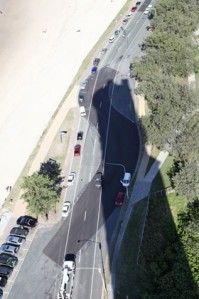 The resurfaced section of track along the beach-front road

“The Gold Coast City Council undertook resurfacing works both to maintain its assets for the community as well as to provide event organisers, who I am advised are pleased with the outcome, with a high quality racing surface.”

“To be honest, I don’t know why it has been resurfaced. I thought it was in quite good condition,” the IRWIN Racing driver told Speedcafe.com.

“The positive is that the new surface that they have put down will be very grippy. That will be an improvement for sure.”