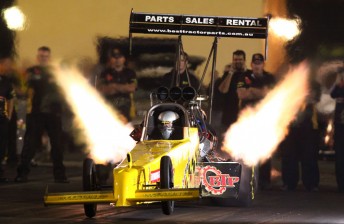 The pair have traded blows throughout the five rounds contested so far in 2011/2012. 12 months ago, the pair were due to meet in the Top Fuel Final at the Winternationals – however that was wiped out due to inclement weather.

The pair both concede they have unfinished business from last year, when they were denied the chance to race off for the biggest prize in Australian drag racing.

“A win at the Winternationals is something that anyone in drag racing wants to do,” said Harris. “Ideally, it would be nice to wrap the Championship up early to focus on the actual racing. I’m hoping it is playing more on Darren’s mind than ours, I haven’t won a series yet but he knows what it is like to have one so I’d like to think it affects him more than me. We’ve definitely got nothing to lose.”

Morgan paid tribute to his rival – but said there will be nothing left in the AEG Powertools Top Fuel machine at any stage of the weekend – he and the Mildura based crew will be throwing everything at winning both the Fuchs Winternationals and the Championship.

“Damien [Harris] has had a great year but the AEG Powertools DMR team have really stepped-up a gear over the last few events and we’re taking this strong form into the round that counts the most.

“It will have double significance for us this weekend with Willowbank commissioning the Mick Atholwood Trophy for Top Fuel. Mick was instrumental in the early stages of my career.

“Winning in Adelaide not long after his passing was emotional, but if I had my name as the first one on that trophy and we won our second Championship as a team, I think that would top it all.

“That’s what our aim is and I’m confident that we can get the job done.”

Although it would appear to be a two horse race, should Harris and Morgan strike trouble during the course of qualifying, Sydney-sider Andrew Cowin is just 59 points behind Harris. With points being scored at every step of the weekend, the Rocket Industries driver will be poised to strike.

Top Fuel qualifies on Saturday and Sunday with eliminations on Monday.