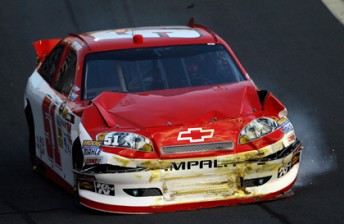 Kurt Busch will miss the next round of the NASCAR Sprint Cup at Pocono after the controversial driver was suspended for abusing a member of the media.

The Phoenix Racing driver was suspended by NASCAR until June 13 after a confrontation with Sporting News reporter Bob Pockrass at Dover International Speedway, following the NASCAR Nationwide Series race on Saturday.

Busch already was on probation for running into Ryan Newman’s car in pit lane at Darlington, which kicked off a scuffle between the respective crews. Busch was also fined $50,000 by NASCAR for reckless driving in the incident.

The latest verbal attack has seen his probation period extended until the end of this year.

After Busch and Allgaier made contact during the race and had an exchange afterwards, reporter Pockrass asked Busch if being on his NASCAR-imposed probation caused him to race Justin Allgaier differently.

“It refrains me from beating the s–t out of you right now because you ask me stupid questions,” Busch told Pockrass.

“But since I’m on probation, I suppose that’s improper to say, as well.”

“NASCAR has suspended Kurt Busch until June 13 and has extended his probation until Dec. 31 for his actions following the Nationwide Series race June 2 at Dover International Speedway.

“Busch violated Section 12-1 (actions detrimental to stock car racing; violation of probation; verbal abuse to a media member) of the 2012 NASCAR Rule Book. Busch had been placed on probation May 15 for his actions during the May 12 Sprint Cup Series event at Darlington Raceway. That probation was scheduled to end July 25.”

Busch has accepted the suspension.

“I accept NASCAR’s decision. I put them in a box, they had to take action and it’s my fault for putting them in this position,” said Busch in a statement released late Monday.

“I apologise for the comments I made to Bob Pockrass.”

Here is the video from the incident