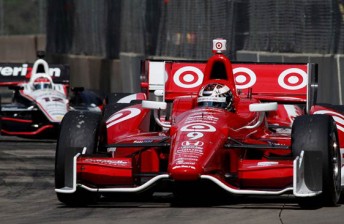 Scott Dixon has scored his first IndyCar victory of 2012

Championship leader Will Power finished fourth behind Simon Pagenaud, after sitting second in the first segment of the race.

The race was decided in a 13-lap sprint after the original 100-lap journey was slashed to 65 laps after the track broke up. CLICK HERE to read that story.

After a two hour mid-race delay, the green flag flew for the last 13 laps. Then to add to the drama a sprinkle of rain saw a number of cars spinning, including Ryan Briscoe and Helio Castroneves.

Up front Dixon got the jump and Pagenaud moved ahead of Power before the full course caution for Castroneves’s stopped car.

Another re-start, and this time Franchitti moved up on both Power and Pagenaud to take second place.

The final run to the chequered flag was relatively uneventful as Dixon won the race from Franchitti, who started 14th, with Pagenaud in third and Power fourth.

“A big day for points which helps us immensely on the chase on Will.

“I was worried about Dario on the final re-start as he had the softer tyres. However, we kept it together and got the win.”