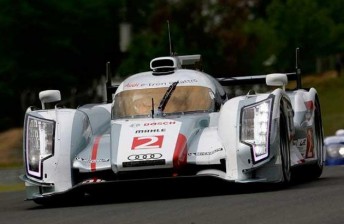 The #2 Audi proved fastest at the test day

Allan McNish has led an Audi 1-2-3 at the top of the Le Mans test day time sheets despite crashing the #2 R18 e-tron Quattro late in the running.

Having set the day’s best time of 3:25.93s, the McNish/Tom Kristensen/Dindo Capello entry sat out the last 90 minutes of the day after the Scot struck the barriers at Tetre Rouge.

The #2 car had also lost 90 minutes of running in the first of the two four-hour sessions with a fuel leak.

Loic Duval set the quickest time of the morning session in the Audi Ultra he will share with Romain Dumas and Marc Gene. Further improvement in the after saw the trio end the day third.

It was a promising outing for Toyota, with its entries for Alexander Wurz/Nicolas Lapierre/Kazuki Nakajima and Anthony Davidson/Sébastien Buemi/Stephane Sarrizan fourth and fifth fastest respectively on debut.

Completing the factory prototypes was the Oliver Jarvis/Marco Bonanomi/Mike Rockenfeller Audi, with Rockenfeller not present due to DTM duties in Austria.

The #21 Strakka Racing HPD was the best of the privateer runners, some 5.5s further adrift of the slowest Audi.

Of the Australians, David Brabham’s #22 JRM HPD was 11th fastest, while John Martin’s #25 ADR-Delta Oreca-Nissan was 20th outright and seventh in LMP2.

Part-time V8 Supercars driver Allan Simonsen was at the wheel of the Aston when its fastest time was recorded.

Much attention meanwhile was on the public debut of the Highcroft Racing-run DeltaWing-Nissan, which ended the day with a best time of 3:47.98s to be amongst the tail end of the LMP2 runners in 32nd fastest.