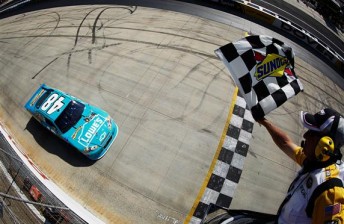 Jimmie Johnson has won the FedEx 400 benefiting Autism Speaks with a dominant performance at Dover.

The five-time NASCAR Sprint Cup Champion scored his second win of the year, 57th of his career, and seventh at Dover, to tie Richard Petty and Bobby Allison for most wins at the ‘Monster Mile’.

Johnson led 289 of the 400 laps, including the final 76, on his way to victory lane ahead of Kevin Harvick and Mattt Kenseth.

“It was a team effort and obviously I had an amazing Lowe’s Chevrolet today,” said Johnson.

“I think the way we protected this win was pit road. Last week was hard on us, but this week our guys stepped up every time I was on pit road.”

Australia’s Marcos Ambrose recovered from a tough first half of the race to claim 10th place and improved one place in the standings to 19th.

“We were fighting for our life out here for Richard Petty Motorsports,” said Ambrose.

“Top-10’s have been hard to come by this year and I really wanted to get two top 10’s for our company this weekend.

“As respectful as I can be to Biffle who is at the front of the championship battle, I didn’t want to let him pass because I wanted a top-10. It was a good fight and that is what racing is all about.”

Greg Biffle retained his series lead by one point over Kenseth finishing on the bumper of the Tasmanian.