Mark Martin on pole at the Monster Mile

Mark Martin on pole at the Monster Mile 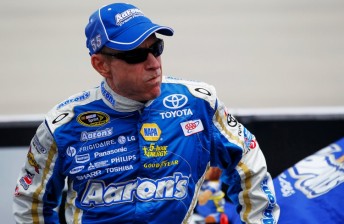 Mark Martin on pole for the third time in 2012

Mark Martin has once again proved age is no barrier taking his third pole position of the 2012 NASCAR Sprint Cup season, the FedEx 400 at Dover International Speedway.

The 53 year-old was the last driver to make a qualifying attempt and he ran just 0.005 of-a-second faster than Jimmie Johnson.

The Coors Light pole award was Martin’s fifth at Dover and the 54th of his career, eighth most all-time.

“I anticipated the car being loose, but I didn’t ask [crew chief] Rodney [Childers] if he tightened it up. I knew the conditions were looser than they were in our mock qualifying run [Friday], and I didn’t want to ask him because I didn’t want to be concerned.

“I knew that I only had to make it one mile without wrecking, and I was going to drive to the limit and slightly beyond, and I felt like I did that. I wouldn’t want to do that again. But I couldn’t sit on these poles without the fastest race car, and MWR [Michael Waltrip Racing] and Rodney Childers in particular and the guys on our team are doing that.”