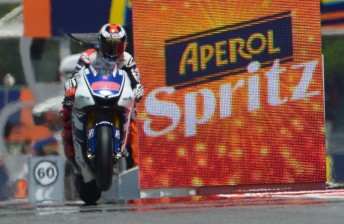 Jorge Lorenzo has overcome a strong challenge from countryman Dani Pedrosa to take his third win of the season in the Catalan Grand Prix.

The factory riders from Yamaha and Honda swapped the lead on several occasions throughout the race, before Lorenzo made the winning move with less than six laps remaining.

Pedrosa, who had found himself more than a second in front midrace after a small mistake from his rival, had no answer in the closing laps, eventually taking the flag 5.0s adrift.

Andrea Dovizioso scored his first podium of the season by holding off a late charge from Casey Stoner.

The pole-sitting Stoner dropped to as low as sixth in the opening laps, eventually missing the podium for the first time in 14 months.

Spies’ afternoon went awry when he fell to the back of the field while trying to take the lead from Pedrosa on the third lap.

Lorenzo now holds a 20 point lead over Stoner after five of 18 races, with Pedrosa a further 10 points adrift in third.