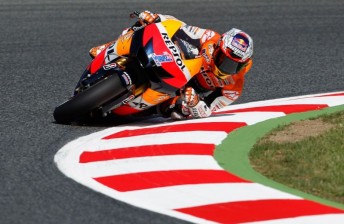 The Australian set his best time of 1:41.30s with eight minutes still remaining in the hour-long session.

The result marks the 40th pole position of Stoner’s Grand Prix career, which is set to come to an end at the conclusion of the 2012 season.

Dani Pedrosa ended the session with just the fifth fastest time after running off at Turn 10 during the final minutes.