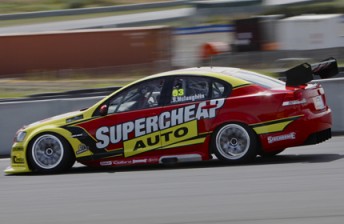 Scott McLaughlin has taken pole position for the first race of the fourth round of the V8 SuperTourers Series – the Mike Pero 250 – at Hampton Downs today.

The result is a shot in the arm for the Supercheap Auto team, who withdrew from the last round at Manfeild due to engine issues.

“After the dramas we have had as a team, I’m just stoked to get the pole position,” said McLaughlin.

“The MPC Supercheap team really deserve this pole position, they really have put a lot of time in to making the car reliable as well as fast.”

McLaughlin’s Supercheap Auto team-mate Geoff Emery scored his best result for the season, taking 11th on the grid, but was the innocent victim in a clash with Andy Knight, who collected the back of Emery’s Commodore.

It was not all bad news for Knight, however, as he scored the third fastest time.

In other news, McIntyre’s chances of clinching the sprint title were improved today with the announcement that the 50 points deducted for a technical infringement at Ruapuna have been reinstated following a V8ST Appeal Tribunal hearing last night. McIntyre now moves to 1588 points, with Reid still ahead on 1626 points.