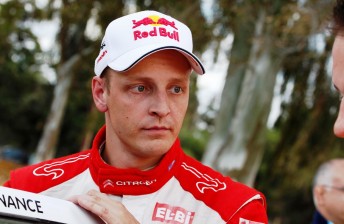 Mikko Hirvonen has walked away from a big testing crash

Citroen factory driver Mikko Hirvonen and co-driver Jarmo Lehtinen have been involved in a high-speed rally testing accident in Italy.

The crash was caught on video with eyewitnesses just metres away from the DS3 WRC when it clipped a bank and rolled into a surrounding paddock in Tuscany.

Hirvoenen, who sits second in the championship behind team-mate Sebastien Loeb, was taken to hospital along with Lehtinen for tests but both have been given the all-clear.

The test was part of preparations for the upcoming Rally New Zealand and occurred just after lunch. Due to restrictions on testing for the long-haul rallies, only a pre-event shakedown is permitted on events such as New Zealand and Argentina.

“Mikko rolled a lot of times, the accident was high-speed,” said a Citroen spokesperson.

“The most important thing is that Mikko and Jarmo are both OK. They are back at the hotel tonight. The test is finished.”

Rally New Zealand gets underway from Auckland on 21 June.

Here is the video of the accident