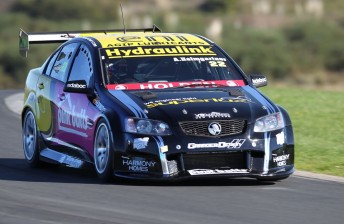 Young gun Andre Heimgartner has emerged fastest from Friday practice ahead of Round 4 of the V8 SuperTourer Series at Hampton Downs.

The Holden driver lapped the 2.8km venue in a best time of 1:04.12s – some 0.35s quicker than that set in Friday practice for the opening round in February.

Manfeild round winner and series leader Jonny Reid was the fastest of the Fords in third.

The top 13 cars were separated by less than 1s, pointing to a tight weekend of racing ahead.

A second practice session of 60 minutes duration will be held at 1000 local time tomorrow ahead of qualifying at 1300 and Race 1 at 1510.