The annual Father’s Day meeting, which brings together some of Australia’s most historic touring and formula cars, will hold its event on the track’s new 4.5km circuit.

V8 Supercars announced yesterday that its August return to the facility (formally known as Eastern Creek) will be held on the traditional 3.9km Grand Prix layout. 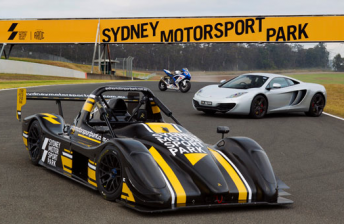 Touring Car Masters series leader John Bowe says that it is an honour for the Muscle Car Masters meeting to become the first major meeting on the extended layout, but reserved his judgement on the layout.

“I was at the track while they were building it and I had a look around, but I haven’t seen it complete so I don’t really know what it will be like,” Bowe told Speedcafe.com.

“It’s fitting that the Muscle Car Masters will be run on the entire circuit. It’s a great race meeting and one of my favourites of the year, so to be able to use the full new track is an honour.

“When they extend race tracks, I find they try and fit too many corners into tiny spaces. It will be interesting to see if they’ve done a good job of it, because to be honest, the track itself was a pretty good. Hopefully it doesn’t destroy the flow.

“Corporate Hill was a pretty good, challenging corner. That obviously is now a very different corner on the full circuit, so I’ll be interested to get there and get into it.”

While the Muscle Car Masters will be the first ‘major’ meeting to run the new circuit, it will not be the first. The upcoming round of the New South Wales state championships will be contested on the full circuit.

Australian Racing Drivers’ Club CEO Glenn Matthews said that the addition of the extra layout to the Masters meeting will provide competitors and fans a new experience.

“The Australian Muscle Car Masters has been our biggest event for many years, bringing racing from the glory days of Australian motorsport to a whole new audience every Father’s Day,” Matthew said.

“For competitors, they will have a whole new challenge with the technical new section of circuit sure to provide some major thrills across the weekend. For spectators, they will be able to take advantage of many fantastic spectators areas, that now have better views of the circuit than ever before.”

The Muscle Car Masters will be held on the Father’s Day weekend (September 1-2).