Waters to make F3 debut with Mygale at Hidden Valley

Waters to make F3 debut with Mygale at Hidden Valley 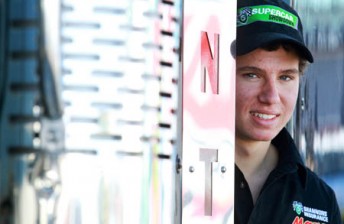 The event will mark the first time that Waters, who won last year’s Australian Formula Ford Championship in a Sonic-prepared Mygale, has raced a wings and slicks car.

The debut of the factory entered M-07 is a significant step in Mygale Australia’s push into the Australian Formula 3 category, which has been dominated by the Italian Dallara chassis since its inception.

Waters will test the Team BRM-run car at Mallala this Friday following its initial shakedown in the hands of Mygale Australia’s Greg Woodrow last week.

“I’m not really sure what to expect from a wings and slicks car, so it’ll be interesting to see what it’s like,” Waters told Speedcafe.com.

“It’ll be great to be getting back into a Mygale again. I think the car should be reasonably competitive, but the goal is to just go there, finish all the races, keep the car clean and see where we end up at the end of the weekend.”

While jumping at the opportunity to make his F3 debut, Waters says he is firmly focussed on his burgeoning V8 Supercars career with Kelly Racing.

Woodrow shook down the car at Mallala last week

“My focus is still V8 Supercars, there’s no doubt about that,” said Waters when asked if he harbours open-wheel ambitions.

“The Formula 1 dream is near on impossible, realistically that’s long gone for me, but obviously if someone offers me a drive like Mygale has for Darwin then I’ve got my ears open.

“It’s good to be doing laps in something between DVS rounds. It’s a long break between Perth and Townsville and any laps you do is good experience.”

Like Waters, Woodrow is keen to play down expectations of strong results for the car first-time out in the Australian championship.

“Last week was the first time that the car turned a wheel, so we’re not thinking that we’ll go up there and be on the podium,” Woodrow told Speedcafe.com.

“After Hidden Valley we’ll go to a few tracks, do some testing and really start to move it forward.

“The reason that we’ve put Cam in the car is that we rate him very highly, we’re keen to get his feedback and we’re glad to be able to give him the experience.

“He’s done a lot for Mygale, and later in the year I’d love to get some of the other guys like Tim Blanchard and Nick Percat in the car to pay them back for what they’ve done for us as well.”

The factory entry will be one of two Mygales in the Hidden Valley field following the debut of Jon Mills’ own M-07 at Symmons Plains earlier in the year.

With Harvest Motorsport’s M-10 model also set to make an appearance later in the season, Woodrow believes that F3 is on the way up in Australia.

“There’s a lot of potential for F3 in Australia and I can’t see why more Formula Ford kids aren’t doing it,” said Woodrow.

“If you’ve got Mark Webber telling Mitch Evans to drive an F3 car before he goes to Europe, what more do these kids need to hear?

“There’s a perception out there that it’s as expensive as running a Porsche or a DVS car, and I can tell you it’s about half that. There are a lot of control parts in the cars now that have brought the costs down, and they’ve done a really good job with the new (Mercedes) engine package.”