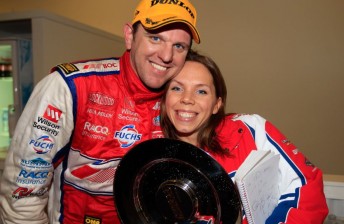 Jason Bright and partner Lucy, who will give birth to their first child later this year

Jason Bright’s 2012 V8 Supercars Championship to date has been a tale of two halves.

The Team BOC Holden languished down in 21st in the standings after the ITM400 Hamilton, but has since risen 10 places thanks to strong performances at Barbagallo and Phillip Island.

Speedcafe.com’s Stefan Bartholomaeus spoke to the former Bathurst winner to find out more about the change in form.

SPEEDCAFE: Jason, test days are pretty precious commodities in this category. You had one on Monday at Winton, how did it go?

JASON BRIGHT: We got through a bit of stuff, but we had a mechanical problem which cost us a couple of hours at the end of the day which was a bit disappointing.

Over the last couple of rounds we’ve made a few changes with engineers and the philosophy of how we go about things, so it was good to spend a bit of time reaffirming some of the changes that we’ve made. I felt as though we had a pretty good day in that respect even though we didn’t get the full day in. I think it will still put us in pretty good shape for the next couple of rounds.

SPEEDCAFE: You’ve had a real upswing in form over the last two events. Barbagallo was somewhere you went well last year, but to go out and back that up at Phillip Island where you’ve struggled a bit over the last couple of years, that must have been satisfying.

BRIGHT: It was very satisfying. To be honest, we made a fair bit of ground early in New Zealand. I was pleased with the pace we had on Friday there, and we made a couple of wrong calls over the rest of the weekend while we were trying to learn things and maybe didn’t finish off the weekend as well as what we should have. But come Sunday night in New Zealand I was pretty sure I knew where we’d gone wrong. 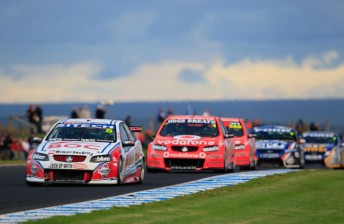 Bright has run at the front over the last two meetings

In Perth we didn’t have any dry practice time, so it was a pretty big gamble to go away from what we’d run the year before. We did decide to use the new stuff that we’d practiced and qualified with for the races and it turned out to be quite good.

But, like you said, Perth was good to us last year, so Phillip Island reaffirmed that the direction we’ve been going is working. The car was very strong there all weekend. As far as I’m concerned, over the last couple of rounds we’ve shown the best hard tyre qualifying form that we’ve ever had, so I’m pretty pleased with how far we’ve come.

SPEEDCAFE: You mentioned the engineer switch (Phil Keed moving to Fabian Coulthard’s car and Andrew Edwards shifting to Bright’s car) that took place before Hamilton. Talk us through the reasons behind that. It looked like a big decision.

BRIGHT: It was a very big decision. Phil and I have had a lot of success together, but it wasn’t working as well as it had in the past. Towards the end of last year we certainly didn’t continue on from the results that we were having in the middle of last year, and it wasn’t really progressing any better this year. There were some differences of opinion on the direction that we needed to go, and I thought as though we weren’t really achieving anything being on the same car.

It was a difficult situation because we’d had good success before so a lot of people thought that we should still be working together. But when you’re pulling in different directions it’s not productive for anyone, let alone the team as a whole. Brad made the decision to separate us to give everyone a chance to explore the different philosophies.

You could say that it was a leap of faith on Brad’s part. Maybe it should have happened at the end of last year, I don’t know, but I think it’s proving to be a good exercise. We’ve certainly progressed a fair bit in the last couple of rounds and been able to focus solely on the one set-up rather than switching backwards and forwards like we had been. It’s what we needed to do.

SPEEDCAFE: So how has it been working within the team as a whole over the last few events? Are the #8 and the #14 cars running separate programs?

BRIGHT: Not really. It started off that way, but it’s really just small things. It’s philosophies on ways that different components work. I think that we’re sort of going in the same direction at the moment, but at each race meetings we have started off quite different. At Perth we finished off quite different, but at Phillip Island we finished very similar. Hopefully at the next test day and at the next couple of rounds the cars will be more closely aligned.

I thought that the performance we had at Winton and Barbagallo last year were a result of those tracks suiting us quite well and not showing up some of the weaknesses we had in the car. Some other tracks really showed up the weaknesses in the car and particularly in my driving style. I like to carry a lot of brake into the corners, and at times I was having a lot more trouble than what Fabian was with a similar set-up. I think there were certain tracks that really punished the way our car was working, and I think we’re on top of that now.

SPEEDCAFE: Certainly since Barbagallo your qualifying has been outstanding…

BRIGHT: Yes, over the last five sessions it was only the one that got red flagged in Perth were we’ve been outside of the top five. The last two years have been very frustrating with the way we’ve been qualifying. Up till then I’d always considered myself a reasonable qualifier, but when things aren’t going right it’s not hard to qualify at the back of this field!

SPEEDCAFE: What would make a successful second half of the season for you? Do you look at where you are in the points standings, or do you just try and win as many races as you can?

BRIGHT: We’ve got to make sure that we continue to improve. For me, I just want to go out there and win as many races as we can. I’d love to walk away from the enduros with some really good results.

Championship wise, there are four guys at the front that are just having the sort of dream run that you normally only see one guy have. For four guys to be so close – they’ve all only had one or two bad results, which is a bit unheard of. If there’s just one runaway guy at the front you can expect them to trip up at some stage, but to expect all four of them to trip up is a bit of a long shot.

We’ve moved up a long way from where we were after Adelaide, and now we’ve got to try and get up into the top five or six by the end of the year. I think that’d be a pretty good championship result for us.

SPEEDCAFE: Looking beyond 2012, what are your early feelings on how the team is positioned for the Car of the Future? You guys are one of many currently building up a base frame from Pace Innovations. The whole project is a massive undertaking.

BRIGHT: It is for sure. I look forward to COTF in some ways because it’s a clean slate. I’m sure we’ll be able to take some of the stuff we’re leaning at the moment into COTF, and I think we can hit the ground running as good as everyone else.

The key to it will be making the testing count when we finally do hit the track. Everyone will have to deal with all of these new components coming together, and I’m really looking forward to the challenge of trying to develop it faster than anyone else.