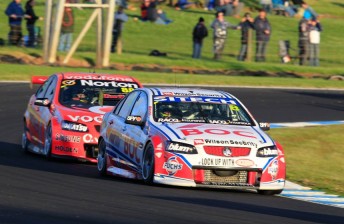 Jason Bright and Craig Lowndes duke it out at Phillip Island

Jason Bright believes that the strong form shown by his Team BOC Commodore over recent events validates the squad’s decision to shuffle its engineering line-up earlier this year.

The move, undertaken before the ITM400 Hamilton, saw race engineers Phil Keed and Andrew Edwards swap jobs, with the former shifting to Fabian Coulthard’s car and the latter to Bright’s.

The decision broke a much vaunted partnership between Keed and Bright, who had won races together at Walkinshaw Racing and Ford Performance Racing prior their success at Brad Jones Racing in the middle of last year.

Bright languished down in 21st position in the 2012 points standings after Hamilton, but has since gained 10 places following strong runs at Barbagallo and Phillip Island.

According to the former Bathurst winner, the decision to change tact has borne fruit for the whole team.

“It was a difficult situation because we’d had good success before so a lot of people thought that we should still be working together,” Bright told Speedcafe.com.

“But when you’re pulling in different directions it’s not productive for anyone, let alone the team as a whole.

“We’ve certainly progressed a fair bit in the last couple of rounds and been able to focus solely on the one set-up rather than switching backwards and forwards like we had been. It’s what we needed to do.”

For more on the team’s recent upswing in form, the background to the engineering reshuffle and Bright’s feelings on the Car of the Future, CLICK HERE for today’s full Cafe Chat interview.