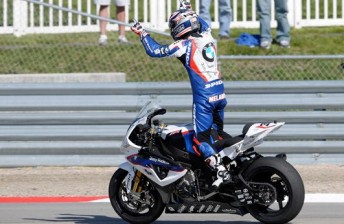 Carlos Checa and Marco Melandri have shared the victories in the United States round of the World Superbike Championship held at Miller Motorsport Park on Memorial Day.

Checa and his Althea Racing Ducati proved too strong for the field in Race 1, where the Spaniard led home Melandri by 2.31s.

The BMW Motorrad rider turned the tables in the second race however when Checa fell while leading comfortably.

Max Biaggi took third in both races on his Aprilia. The 2010 champion now holds an extended 18 point lead over joint second placed men Melandri and Tom Sykes in this year’s title race.

The championship continues at Misano on June 8-10.