Not even an early pitlane incident or a final lap battle could stop Dario Franchitti from winning his third Indianapolis 500.

The Scotsman was spun in the pits on lap #15 of 200 by EJ Viso. His Chip Ganassi Racing crew turned him around, changed his nose cone and then he went to work.

Re-starting 29th over the next 50 laps he climbed back into the top three, as he work with team-mate Scott Dixon.

Also in the mix was Japan’s Takuma Sato, who took the battle right to the final lap when he made a move at Turn #1 which saw him spin off into the wall handing Franchitti the win from Dixon and Tony Kanaan.

The race featured a record 35 lead changes from 10 different drivers.

An emotional Franchitti dedicated the victory to Michael Wanser, the son of Ganassi team manager Barry who died from leukaemia, along with defending Indy 500 Champion the late Dan Wheldon.

“What a race – what a race,” said Franchitti. 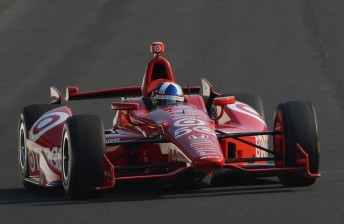 Nothing could stop Dario Franchitti at Indy

“I think DW (Dan Wheldon) would be proud of us coming from the back and that last lap with Takuma.

“When I looked at those in front as it came down to the end they were all friends of Dan and that summed it up.

“I have to say thank you to Honda. We had a tough qualifying run, but those guys work so hard. All my wins have come with Honda and this means the world to me.

“Man this is Indianapolis – three times a winner. To have my name either side of Dan’s means more than anything.”

After starting on the pole and being in the mix at the front over the first 50 laps, Australia’s Ryan Briscoe slipped back down the order before charging through to fifth place at the end.

“They were able to run more downforce than us and still have the power down the straights,” said Briscoe.

“I think the heat today hurt us for horsepower.

“I was going to give it a go and with six laps to go the anything can happen, but that last accident stopped our run on the final lap.

“There’s no doubt we raced.”

Will Power’s Indy 500 hopes ended on lap #81 when Mike Conway lost control in front of him and the championship leader was left with nowhere to go. Power’s car got underneath Conway’s and turned it on its side along the wall. Both drivers were OK after the spectacular accident.

Power’s Penske team-mate Helio Castroneves was lucky to avoid a bouncing wheel as he came upon the scene. The Brazilian telling his crew the dislodged wheel may have touched his right front.

New Zealander Wade Cunningham’s first Indianapolis 500 was troubled from the outset with electrical problems forcing him to make multiple stops. The Kiwi forced out having completed only 42 laps.

An early day for former F1 driver Jean Alesi after both he and Simona de Salvestro were black-flagged for running too slow. The only two runners with the Lotus engines, both parked their cars just 12 laps in.