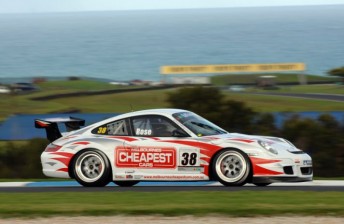 Kane Rose has secured victory in Round 2 of the Porsche Staff Solutions International GT3 Cup Challenge by following home Jeff Bobik in the third and final race.

Just 0.4s separatedthe pair at the chequered flag, with Bobik’s race victory completing an impressive recovery from a qualifying incident that saw the Creative Colour 997 start Race 1 from pitlane.

Ninth, third and first in the three races secured Bobik third for the round, beaten only by Rose and the consistent Goodacre.

Goodacre took a third and a fourth from Sunday’s encounters, having lost out to Brent Odgers in a multi-car dice for third in Race 3.

The hard luck story of the final was 21-year-old series debutant Fraser Ross, who held down third until spinning back to ninth at Turn 4 on the penultimate lap. Ross had been on course to finish second for the round having earlier finished third and second in Races 1 and 2 respectively.

The first three laps of Race 2 had been run under Safety Car after a start-line incident between Terry Lawlor, Brendan Cook and Phillip Wodbury that ended the weekend for all three competitors.