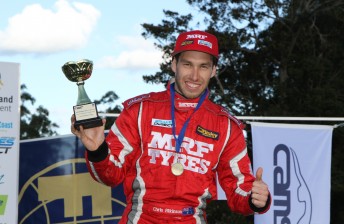 The win is Atkinson’s second in the 2012 FIA Asia Pacific Rally Championship and sees the Gold Coaster claim the prestigious Pacific Cup for the second year running.

“It’s been an awesome weekend and I can’t thank my MRF Skoda team enough for providing me with such a strong car given the tricky conditions this weekend,” Atkinson told Speedcafe.com.

“This is the second year running we’ve won the Pacific Cup which is great to have another trophy to add to the cabinet but more importantly we’ve now extended our lead in the championship to a very healthy margin.”

Second in the event was Scotsman Alister McRae in the Proton Satria S2000 with 67-year-old Kiwi driver Brian Green scoring his second consecutive podium finish in the series coming home third for the weekend.

Leading his MRF Skoda teammate Gaurav Gill by eight points coming into the round, Atkinson now leads the APRC by 38 points over Gill with three rounds remaining in Malaysia, Japan and China, respectively.

Luck 7 V8 Supercar star Tim Slade was a surprise equal-winner with Michael Guest in today’s heat of the Side by Side Challenge.

After a roll on day one, Slade got into the groove  in his Polaris and went head to head with Guest in the Pirtek Racing Can Am after Cody Crocker slipped out of contention with two punctures.

“Would you believe after 52 minutes of stages, two of us had the same overall time!” 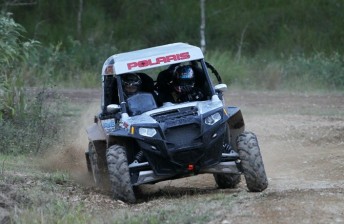 Heat 1 winner Jack Monkhouse fell victim to a right rear suspension failure on his Nissan Sylvia S15  forcing him out of the event handing the win to Evans.

“It was a typical drama packed Rally Queensland!” said Evans.

“We had a bad start and were down by eight minutes after the second stage after a flat tyre, we tried to change it and the car fell off the jack twice so we lost a lot of valuable time.”

The Bosch four-wheel-drive Australian Rally Championship saw Michael Boaden completely dominate the field in the second leg of the rally to score his maiden win in a round of the Bosch ARC.

The New South Welshman finished nearly four minutes ahead of Tom Wilde to take the championship lead by two points heading to Round 4 in South Australia.

Round 4 of the FIA Asia Pacific Rally Championship takes crews to Asia for the Malaysian Rally – July 14-15.

Check out Chris Atkinson talking about his victory in Queensland

Check out the highlights from the day