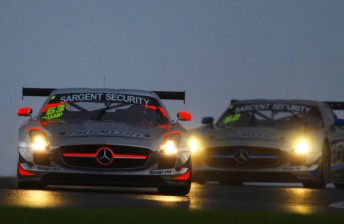 Erebus Racing has taken a commanding one-two finish in Race 1 of Round 2 of the 2012 Australian GT Championship at Phillip Island.

Hackett led Brock during the early stages, before Bowe passed the pair in quick succession at the halfway point.

The two-time Bathurst winner had joined team-mate Nick O’Halloran in starting at the back of the grid after the two Ferrari’s had their front-row qualifying efforts removed for running underweight.

Brock took second from Hackett just prior to the pitstops, but it would be the latter who would eventually prevail – passing both Brock and Bowe’s co-driver Edwards in one move exiting the Southern Loop with 15 minutes remaining.

Edwards had enjoyed a 12s lead over Brock after the stops thanks to regulations stipulating shorter stationary times for those starting at the back of the field.

Edwards could not handle the pace of his rivals during the second half of the race however, eventually dropping to fifth.

O’Halloran and Allan Simonsen scored sixth in the second of the Maranello Ferraris, which have switched from Michelin to Pirelli tyres this weekend.

The gap between O’Halloran and the race leaders grew to 1:40s before the car owner handed over to Simonsen. The Dane continually reset the fastest lap of the race during his stint, eventually taking the chequered flag just 52s in arrears.

The race ran Safety Car-free for its duration, despite a heavy downpour on the warm-up lap making an already track even more treacherous.

A second 60 minute race for the Australian GT Championship will take place as part of Round 3 of the Shannons Nationals presented by Hi-Tec Oils at Phillip Island tomorrow.