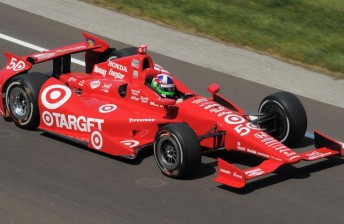 Target Chip Ganassi Racing’s Dario Franchitti has set the fastest time during the final practice during ‘Carb Day’ at the Indianapolis 500.

In a further strong showing Kiwi team-mate Scott Dixon was second quickest during a session, while Marco Andretti was third in the warm conditions.

“The car was good,” Franchitti said.

“The car was as good as it has been all month, really. Good balance, good grip. It’s getting more slippery the more the air temperature goes up, and the more the car moves around, the harder it is behind the wheel. But it’s the same for everybody.

“I think we’ve got a good set-up for race day, although it would have been nice to have that motor for qualifying.”

Nine days of practice and qualifications for the 96th Running of the Indianapolis 500 and pole-man Ryan Briscoe said the final one-hour session proved to be the most informative.

The Australian Team Penske driver was fifth quick in the final practice on the 2.5-mile oval.

“We actually had to adjust the car a lot during that session,” said Briscoe.

“We needed the full hour of running, and we made a lot of changes.

“In one hour of final practice, we just kept tuning so it was good. Everyone was finding the traffic and big speeds. It was warm and humid, very much like race day will be.”

The weather forecast is for mid to high 30s.

Check out the highlights of Final Practice