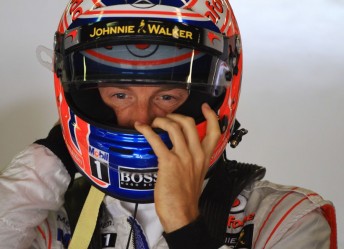 The McLaren driver set a 1:15.746s on Pirelli’s super-soft tyre, and could not be beaten as rain after 30 minutes of the session spoiled what looked to be an entertaining battle at the top of the time sheets.

Compared to his rivals, Button’s time was impressive, but the shower meant that he was the only driver to get the full benefit of the super-soft compound on a dry track.

That lap may prove to be the last dry lap of the weekend, with forecasters predicting showers on Saturday, and possible showers on Sunday.

Ferrari’s Fernando Alonso set the pace in the opening session, plus the fourth fastest time in the second. His team-mate Felipe Massa was also strong in both sessions, signalling a potential return to race-winning form for the famous team.

Neither of Australia’s drivers Mark Webber (Red Bull Racing) and Daniel Ricciardo (Toro Rosso) made any significant impressions on either sessions, with Webber’s Practice 2 result the best of pair.

As is tradition at Monaco, Grand Prix teams will rest tomorrow (Friday) ahead of Saturday’s qualifying and Sunday’s race.

See below for Speedcafe.com’s Formula 1 Race Guide ahead of the Monaco Grand Prix.