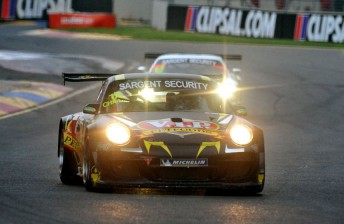 Klark Quinn leads the GT Championship after the opening round

Over 150 competitors will take to the Phillip Island Grand Prix circuit for the third round of the 2012 Shannons Nationals presented by Hi-Tec Oils this weekend.

The event will see both the Australian GT Championship and Touring Car Masters classes return to the Nationals card after several years away.

The 25-strong GT field will include the debut of Peter Conroy’s Audi R8 LMS and Nick O’Halloran’s Ferrari 458.

Nathan Tinkler is making the switch from his Porsche 997 GT3 Cup Car to a Lamborghini LP560-4 this weekend, while Martin Wagg’s seldom raced Aston Martin DBRS9 will join the similar examples of Paul Morris and Ben Egglestone in the diverse field.

Klark Quinn currently leads the series after the opening round at the Clipsal 500 in Adelaide.

See below for the full category-by-category entry lists