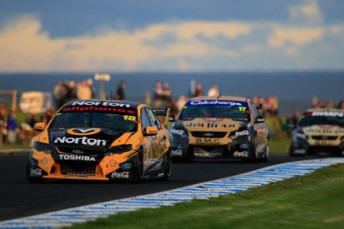 Dick Johnson Racing says it hopes to remain a four-car team in 2013, despite the impending departure of the Racing Entitlements Contract used to run its #18 entry.

Owner of the #18 license, Charlie Schwerkolt, is set to link with Ford Performance Racing next season to create a four-car squad.

DJR had expanded from two cars to four this season, preparing Falcons under the RECs owned by Triple F Racing (Dean Fiore) and Nemo Racing (Paul Morris) alongside its traditional #17 and #18 entries.

The team’s chief operating officer Scott Jennings told Speedcafe.com that, despite enduring lean results during the early part of the 2012 season, DJR hopes to continue running four cars next year.

“We’ve built a base around four cars and it would be silly to go backwards,” said Jennings of the situation.

“We believe we are coming to grips with the four car model, and that’s the way we’d like to stay.”

While the #12, #17 and #49 licenses are all expected to remain with DJR next season, sourcing a fourth license may not prove easy.

Moving Morris’ second REC, which is currently being leased by Tekno Autosports, into the DJR fold looms as one of several possibilities, although it is understood that the Holden team holds an option to buy the license at the end of this season.

Jennings says that he hopes to have a plan for DJR’s 2013 structure in place by mid-year.

“We’ll have to see how everything pans out,” he said of the team’s options.

“We’ll get our management team together and work out what the best case scenario is for Dick Johnson Racing.

“We don’t know what we are going to do. We’ll see what’s available, but ultimately, we’d like to have a plan by mid-year and work on pulling that off.”