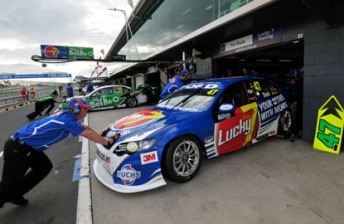 Tim Slade has set the fastest time in the final practice session of the weekend at the Phillip Island 300.

Todd Kelly split the Queensland based Fords in second, while fifth through 10th was filled by Will Davison, Michael Patrizi, Michael Caruso, James Courtney, Craig Lowndes and Jason Bright.

The session featured a single red flag period when Greg Murphy spun into the gravel at the exit of the Hayshed at the nine minute mark.

Sprinkles of rain in the final minutes caught out several drivers. Jamie Whincup and James Moffat both slid off the road in separate incidents at Siberia, while Michael Caruso spun and became stranded on the outside of the circuit at the Southern Loop.

See below for the full Practice 5 result