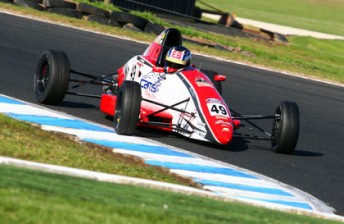 In Race 2, Le Brocq faced several challenges from his rivals before taking out the win ahead of Shae Davies. A fast finishing Scott Andrews finished third ahead of Garry Jacobson and yesterday’s Race 1 winner Matthew Hart.

The return to form is a welcome sight for Le Brocq as he leaves Phillip Island with the round win and the championship lead.

“It’s really good to get up for the win this weekend in the various weather conditions,” Le Brocq said.

“Fortunately in the third race the rear tyres didn’t go away like in the first, and I was able to get a gap on the field.

“We had a shocker at Symmons Plains, but we’re looking pretty good again.

“To come away from the weekend with the championship lead, I couldn’t possibly be happier.”

Sam Power was the only driver not to finish Race 3 as he and Sera made contact, resulting in Sera receiving a post-race penalty.

The Australian Formula Ford Championship now heads to the streets of Townsville for Round 4, to be held on July 6-8.