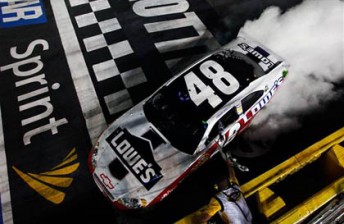 The Henrick Motorsports driver’s victory sees him equal Dale Earnhadt and Jeff Gordon as the most successful drivers in the non-points event.

Brad Keselowski finished second, ahead of Matt Kenseth, Kyle Busch and Dale Earnhardt Jr., who qualified for the event by winning the preliminary Sprint Showdown.

Kevin Harvick finished sixth ahead of Marcos Ambrose, who ran as high as second in one of his most competitive outings.

Johnson said that tying for all-time All-Star wins with Earnhardt and Gordon is an honour.

“It means a ton to me,” Johnson said.

“Those are two of the greatest drivers that have ever been in a stock car. I want to set my goals high, and I want to be considered one of the best to sit in a stock car, and the only way you can do that is by winning big races and piling up those stats.”

Johnson was the first to stake his claim to a top spot in the running order, winning the first 20-lap segment after passing pole-sitter Kyle Busch for the top spot on Lap 15. In winning the first segment, Johnson earned the right to lead the field to pit road before the final 10-lap dash.

Thereafter, Johnson made frequent pit stops and ran behind the rest of the field to save his car for the finish.

“I let it rip around the top and got to the lead, and we were smart from there and made sure we worked on the car and got it right so we could be there at the end,” Johnson said.

“Within two corners tonight – as I was on the outside, which is usually the place you don’t want to be – I knew it was on.

Points will be back on the line next week at the Coca Cola 600 at Charlotte Motor Speedway.