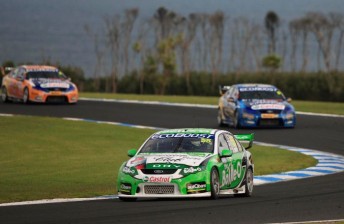 The 26-year-old led the opening 11 laps of yesterday’s Race 10 at Phillip Island after securing a career best grid position of second.

His race came unstuck in the pits however when a split in the nozzle of The Bottle-O Racing team’s fuel hose resigned the Ford driver to making an additional pitstop.

The miscue was just the latest in a series of small errors from both the team and Reynolds that have prevented the #55 entry from scoring a single top five race finish so far this season.

By contrast to his race results, the former Walkinshaw Racing and Kelly Racing pilot has a season qualifying average of 5.9 – the fourth best in the field behind title contenders Jamie Whincup (3.5), Mark Winterbottom (3.8) and Will Davison (3.9).

“Obviously he’s fast, and we’re still trying to keep him focussed as well, because he’s a little loose. I think he showed that in New Zealand and some of those earlier races where in the first couple of laps he was a bit all over the shop.

“We’re working with him to calm him down a bit because he has got the speed. He just needs a little bit of luck.”

Reynolds fell to 20th in the championship standings after eventually finishing Race 10 in 21st position.

Today’s Race 11 of the championship will take place over 45 laps of the 4.45km Phillip Island circuit.

While two-stop strategies have been necessary under the 200km format seen so far this year at Symmons Plains and Hamilton, it is expected that some teams will attempt to stretch their fuel consumption in order to get through the race with just one pit visit.

CLICK HERE for Speedcafe.com’s previous story on the possibility of one-stop strategies in Race 11