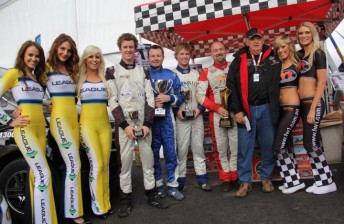 Active Asphalt ’s Adrian Cottrell has taken out the fourth and final FW1 Aussie Racing Cars race of the weekend at Phillip Island.

The 2011 champion clawed his way from third early in the eight lap race to take the chequered flag for the second time this weekend.

Kyle Clews crossed the line in second after leading the race before being passed in the dying laps, ahead of Race 3 winner Peter Carr and Trent Young.

Race 1 winner Tyler Owen battled with Clews for the race lead in the opening laps before spinning on his own on lap 5. He eventually fought his way back to finish 5th.

Clews now holds an eight point lead over Cottrell in the championship after three rounds.

The Aussie Racing Cars will now hit the streets of Townsville for round four, held on July 6-8.