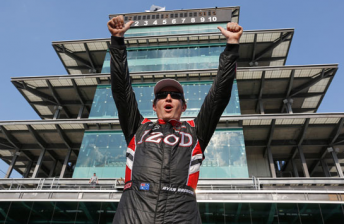 Ryan Briscoe has secured pole position for the Indianapolis 500, becoming the first Australian to do so.

In one of the closest sessions in history, the Team Penske driver set a 226.484mph average around the Brickyard, with Canadian James Hinchcliffe only 0.003mph off Briscoe’s speed.

Briscoe described the pole as “huge.”

“This is huge man, this is unbelievable,” Briscoe said.

“Those four laps were so good and so consistent. Getting the pole at Indy is huge. It feels good to get my first one here.”

Briscoe set a warm-up time of 223.506mph before launching into a fast 226.621mph on his first lap. While he gradually went slower on each of his next three laps, he says that his last lap was the difference.

“I’m proud of this team, this is a big one to win. Those four laps of Hinchtown’s it was nervous time for sure. When we saw that he didn’t get us, it was a great relief.”

Ryan Hunter-Reay will join Briscoe and Hinchcliffe on the front row of the grid.

Today’s qualifying set the grid for the top 24 places, with Bump Day to be held tomorrow.

The Indianapolis 500 will be held next Sunday.

Check out the video of Briscoe’s pole lap


Here is what the top 3 had to say