Baird back on top in Carrera Cup Race 2

Baird back on top in Carrera Cup Race 2 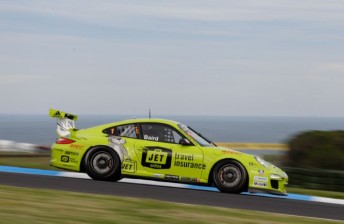 Baird took the race lead heading into Turn 1 on the opening lap and fought off an early challenge from Steven Richards to take his first win for the weekend.

Richards greeted the chequered flag just 0.7s adrift of Baird, but was later handed a five-second penalty for creeping at the start, dropping the Laser Plumbing and Electrical Porsche driver behind Daniel Gaunt in the final result.

Jonny Reid fought his way through from 16th on the grid to take fourth.

Starting the day with a 20 point penalty after the contact with his team-mate Tom Tweedie in Race 1 yesterday, Nick Foster came home in fifth.

Team Kiwi’s Andre Heimgartner was holding onto fourth before a fast off on lap 5 at Turn 3 dropped him out of the top 10, eventually finishing 15th.

Nathan Tinkler was the race’s only retirement after an early off at the Southern Loop.

The final Carrera Cup race of the weekend will be held later today at 1440.