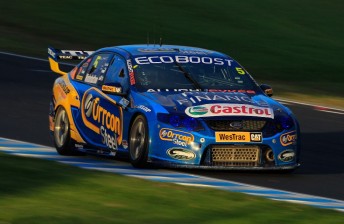 Mark Winterbottom took his third win from 10 races this season

Mark Winterbottom has his eyes firmly set on taking the lead of the 2012 V8 Supercars Championship from Jamie Whincup at Phillip Island tomorrow.

Winterbottom closed the deficit to Whincup from 160 points to just 10 by winning Race 10 at the Victorian circuit.

Whincup failed to finish after being taken out in an incident with fellow title contender Will Davison during the closing laps.

While team-mate Davison expressed a preference to play the role of ‘hunter’ when losing the points lead last-time out at Barbagallo, Winterbottom says he doesn’t share that mindset.

“I don’t know what these other blokes are talking about when they say they’re happy to follow and hunt and all of this sort of shit,” said Winterbottom after his win.

Winterbottom did not have Race 10 all his own way. The Orrcon Steel-backed driver trailed his fast-starting FPR stable-mate David Reynolds during the first stint, before emerging from the pitstops second to Davison.

Winterbottom eventually took the lead by completing a rare outside pass around the fast Hayshed sweeper.

“It’s so hard racing your team-mates,” said Winterbottom of the fight with Davison.

“When you’re racing someone else you can definitely be more aggressive.

“We went side-by-side and we obviously gave each other room – if we both went off there we would have had an angry Tim (Edwards, team principal) in the garage, but I had the quicker can and I wasn’t going to sit behind him. I did it at Tassie and I wanted to get by him here.”

Speaking of the championship, Winterbottom emphasised the importance of continuing to gather points in each and every race.

“This championship is about making sure you don’t make mistakes,” he said.

“What happened wasn’t really anyone’s fault when you’ve got no steering and you’re on the grass (Davison), but it’s about making sure you get points in every race. I’ve had my bad ones and now I’m within 10 I’m rapt.

“We’ll just keep fighting away and try to make the car a bit better for tomorrow. It’s been a great day.”

Race 11 of the championship will take place over 45 laps of the Phillip Island circuit tomorrow.