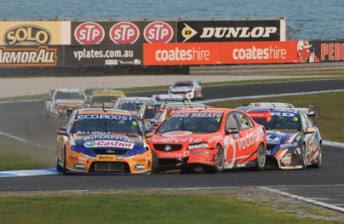 Jamie Whincup has expressed his relief at emerging unscathed from a heavily clash with Will Davison that took both drivers out of Race 10 of the V8 Supercars Championship at Phillip Island.

Having sat as low as 11th during the opening corners of the race, the TeamVodafone driver worked his way into third place before the collision occurred with less than four of the 32 laps remaining.

Contact between Davison and Tim Slade had seen the Tradingpost Ford slide across the wet grass and spear into the right-side of Whincup’s Holden.

“I didn’t even see him coming, the first time I knew of it was the impact,” Whincup told Speedcafe.com of the incident.

“Clearly Will and Tim had bit of an incident coming under brakes and Will was just a passenger on the grass. The incident that caused it happened way back, but the end result was that I’ve got the front end hanging off my car.

“I feel like I have used two lives up this week. If it (the contact) was a little bit later and I turned into the corner a little bit more and it hit the (drivers’) door, it could have been a completely different story.

“I’m really lucky that it didn’t hit the door and also that my hand flicked away from the steering wheel rather than going into the middle of it as it rotated.

“You can get your fingers caught and do some damage in an incident like that, but luckily enough I have no injuries whatsoever.”

Although a combination of the incident and Mark Winterbottom’s victory has seen Whincup’s series lead shrink to just 10 points, the three-time and reigning championship says he’s not concerned by the situation.

“We’re lucky to still be leading it. It’s early days and I’m not worried about the championship,” he said.

“It’s just a shame to see cars in the gravel trap with so much damage. The front wheel is bent and the engine bay is bent – it’ll be a late night.”

CLICK HERE for Speedcafe.com’s post-crash story with Will Davison.