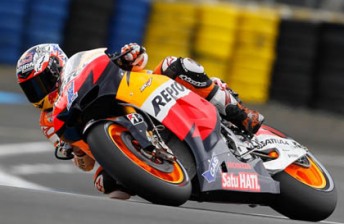 Retirement plans has not slowed down Casey Stoner as he finished fastest in practice at the Monster Energy Grand Prix de France in Le Mans this weekend.

Stoner, who announced he will retire from MotoGP competition at the end of the season, clocked a 1:33.74s in the faster second practice session, 0.26s ahead of his Repsol Honda team-mate Dani Pedrosa.

Leading the championship by one point, Stoner believes making his retirement announcement has relieved him of some pressure.

“After yesterday’s announcement, I definitely felt a weight off my shoulders when I got on the bike this morning” Casey said.

“The last two races I’ve had a lot of thoughts running through my mind and this weekend I already feel better knowing it’s off my chest and we can now focus on the rest of the season, and try to enjoy it.”

Despite still suffering from pain after his crash in Estoril, local favourite Randy de Puniet put in a solid performance to be 13th fastest.