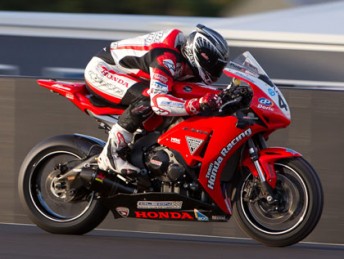 Maxwell who claimed Superpole with a 1:34.90s, fought back from as low as fifth during the race to claim the race lead from Josh Waters on lap 8.

Despite winning today’s race, Maxwell believes he still has a lot of ground to make up on current championship leader Waters.

“We’ve got a long uphill battle ahead of us still,” said Maxwell.

“If we’d finished second in the opening race at Round 1 then things would be very tight in terms of points, but we can’t change that now.”

It was an all Suzuki battle for sixth place as factory rider Ben Attard eventually held off Scott Charlton, Brodie Waters and BMW’s Linden Magee.

The overall round result will be determined by tomorrow’s final 12 lap race, commencing at 1330.