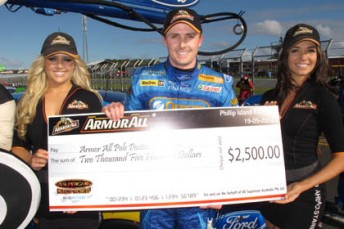 Winterbottom and Reynolds set their best times of 1:32.20s and 1:32.25s respectively with less than three of the session’s 20 minutes remaining.

The Orrcon Steel-backed driver was assured pole when neither were able to improve as their tyres faded during the final sector of their last laps.

Jason Bright will share the second row of the grid with Will Davison, while Tim Slade, Rick Kelly, Craig Lowndes, Jamie Whincup, Garth Tander and Lee Holdsworth complete the top 10.

Whincup set the pace for much of the session but fell down the order in the final five minutes having been unable to improve on his third and final run.

All three FPR Falcons lingered outside the top 10 until completing their first green-tyre laps at the halfway point.

Winterbottom has now taken two Armor All Pole Awards this season following his earlier effort in qualifying for Race 3 of the championship at Symmons Plains.

See below for audio from pole-sitter Mark Winterbottom.

See below for the full Race 10 qualifying result