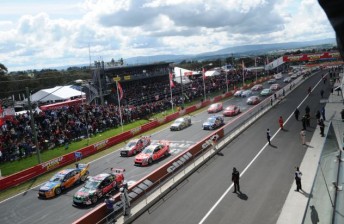 All of the seats in this year’s Sandown and Bathurst V8 Supercars endurance races have been filled.

Confirmation that Daniel Gaunt will drive with Karl Reindler in the #21 Fair Dinkum Sheds Commodore VE has put a name to every seat for both of the two-driver V8 events.

The only team yet to lock in its pairings is Garry Rogers Motorsport. The team has not confirmed who its co-drivers Jack Perkins and Greg Ritter will team up with. During the Phillip Island co-driver sessions, Perkins drove Alexandre Premet’s #33 Fujitsu Commodore, while Ritter was paired with Michael Caruso.

The only changes to the entry list, below, could come from a Wildcard entry, with Kelly Racing’s potential ‘Shannons Supercar Showdown’ being the most likely extra car.

The Sandown and Bathurst co-drivers were given their first hit-out at Phillip Island yesterday during the first two practice sessions.

See below for Sandown and Bathurst’s endurance driver list