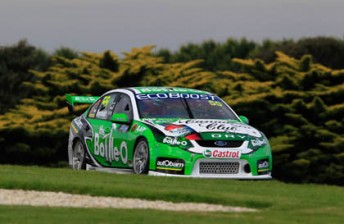 Ford Performance Racing has set the benchmark in the final practice session prior to qualifying for Race 10 of the V8 Supercars Championship at Phillip Island.

The factory prepared Fords of David Reynolds, Will Davison and Mark Winterbottom ended the 30 minute hit-out first, second and fourth on the time sheets respectively.

Craig Lowndes was the best of the Holden runners in third, while team-mate Jamie Whincup ended up just 16th after being baulked on what appeared set to be his fastest lap.

Challenging conditions greeted the drivers for the session, with yesterday’s north-easterly wind having turned into a strong south-westerly overnight.

The wind and damp patches on the circuit from early morning rain provided some scary moments for the drivers.

Shane van Gisbergen was lucky to escape a high-speed rotation through the grass at the Hayshed in the early minutes that ended just short of the tyre wall at Lukey Heights.